The Michigan Public Utilities Commission (MPSC) has, until quite recently, maintained an attitude that “the meters are the property of the utility and they can do as they wish about meter replacements.”  Statements to this effect have been made (with a straight face) on multiple occasions by MPSC spokespeople in response to citizens.  The Commission has argued that they have jurisdiction only to regulate rates charged to customers.

Does anyone seriously think this is a correct or responsible position (or even an honest position) for the Commission to take? The MPSC was created by the legislature precisely in order to protect the public from the arbitrary power that a monopoly would otherwise have over their customers – not only over rates but all aspects of service.  The statute under which MPSC operates reads as follows:

This decision was originally supposed to happen only after an economic analysis of the costs v. benefits achieved in the pilot program in Grosse Isle and Harsen’s Island.  Yet the decision to proceed with mass deployment in Detroit and Oakland County was made without that cost-benefit study and over the objections of then Attorney General Mike Cox.

All of this was allowed to go forward without the MPSC having conducted any investigation into the possible consequences to homeowner privacy, health or safety.  And now DTE reports that it has installed 650,000 meters already and will ultimately install about 2 million.

But on January 12th the Commission announced that it would open an investigation into whether these devices have bad consequences for the health, safety or privacy of utility customers, and whether or not opt-outs should be allowed.  At the same time the Commission hints that it may lack the jurisdiction and/or the expertise to actually order a remedy.  Also the Commission’s Order makes no provision for stopping the ongoing deployment pending the results of the investigation.

The Commission was, in fact, pushed into opening this investigation because of the overwhelming pressure from city governments which have, in city after city, either passed resolutions against the meters or outright bans.

We think continued public pressure, public meetings, more news coverage and many more actions by city governments will be needed in order to:

If you share our outrage that things have come this far please:

11 thoughts on “The Attitude of the Michigan Public Service Commission” 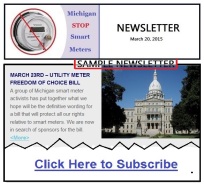