A story reported first by Mercury News on January 29th, 2015 and again by Contra Costa Times on January 30th, reveals that search warrants were served by state police on the home of Michael Peevy, former Chairman of California Public Service Commission (CPUC), and on the home of Brian Cherry, former CEO of Pacific Gas & Electric (PG&E). These warrants were served in the wake of a steadily increasing drumbeat of news outlets calling for a criminal investigation of these two. For example, columnist Thomas Elias of the Santa Monica Mirror had urged in his January 25th column that a federal grand jury be convened. Other media have been calling for a state level investigation in the wake of mounting evidence of highly improper communications between the utility and its regulators from 65,000 emails released by PG&E in response to public pressure.

The emails revealed a cozy relationship between Chairman Peevey of the CPUC and Brian Cherry CEO of one of the largest utilities that CPUC was supposed to be regulating. Some of the emails revealed that Cherry had enlisted Peevey’s help in ensuring that the right administrative judge would preside over a billion dollar rate case. Peevey in turn had made it clear to Cherry that substantial donations of funds were expected in return for such a favor.

“A search warrant in this type of case is a very serious step,” said Peter Henning, a law professor with Detroit-based Wayne University. “You have to convince a judge that there is probable cause that a crime was committed at the locations that were searched. It indicates a fear that evidence might disappear. The prosecutors are driving this.”

(The following paragraph has been revised based on new information to insure Sandi Mauer receives credit for the smart meter investigation of Peevey emails)
While smart meter issues have not been front and center in these investigations as yet, an examination of the 65,000 emails is ongoing with the work being conducted mostly by Sandi Maurer of the EMF Safety Network with support from Stop Smart Meters.  Josh del Sol, producer of the film “Take Back Your Power” recently reported some of the interesting facts unearthed by Sandi’s investigation. She found clear evidence that Peevy and Cherry knew of the harm to health that could be caused by smart meters as far back as 2010, yet did their best to keep this information from the public. In the email below, for example, Peevy makes a suggestion to Cherry as to how PG&E could best minimize this problem by quietly letting some customers opt-out if they could produce a doctor’s letter. 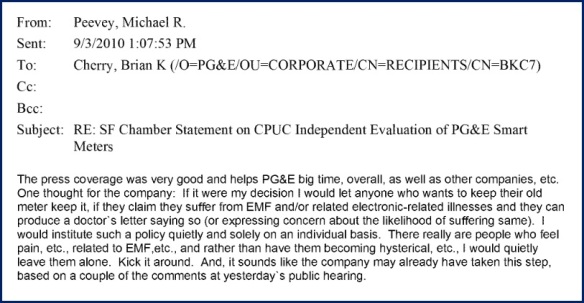 There is also evidence in the email below, from Cherry, that there was an understanding the CPUC would delay any decision on smart meters until after all these new meters were installed:

There are so many parallels to the Michigan situation one scarcely knows where to begin. Too cozy a relationship between our PUC officials and the industry they are regulating? Putting industry interests above the interests of the utility customers? Judge shopping?

Those of us involved in the smart meter resistance have seen, time and again, that our own Public Service Commission clearly favors the interests of Michigan’s two largest utilities over the public interest they are supposed to be protecting.

Michigan has a system of administrative judges who are supposed to be independent of the agencies whose cases they hear. These judges are employed by a separate state agency known as Michigan Administrative Hearing System (MAHS). Yet we see, in case after case, that cases involving PSC business are steered to the same judges. In the decisions of these judges we find the same pro industry biases that we find in the Commission itself.

The Commission and its appointed judges have shown, in a series of cases, to be deaf to the cries of those who are being harmed by this pernicious smart meter technology, while practically genuflecting to the big utility companies. They have refused to hold any evidentiary hearings on health issues related to the new meters. They have refused to adopt a meaningful opt-out program that would actually protect electro-sensitive customers, preferring instead to institute a sham opt-out policy that plays right into the hands of the utilities they are supposed to be regulating. They have refused to institute real privacy protections for utility customers, preferring instead to allow the utilities to gather up private information and store it permanently in huge databases. While we may not have unearthed a financial quid pro quo as yet, all the other indicators of collusion are plain for all to see.

5 thoughts on “California Public Utilities Officials Investigated – Is Michigan Next?”